First underwater footage of a rare Angelshark taken in Wales 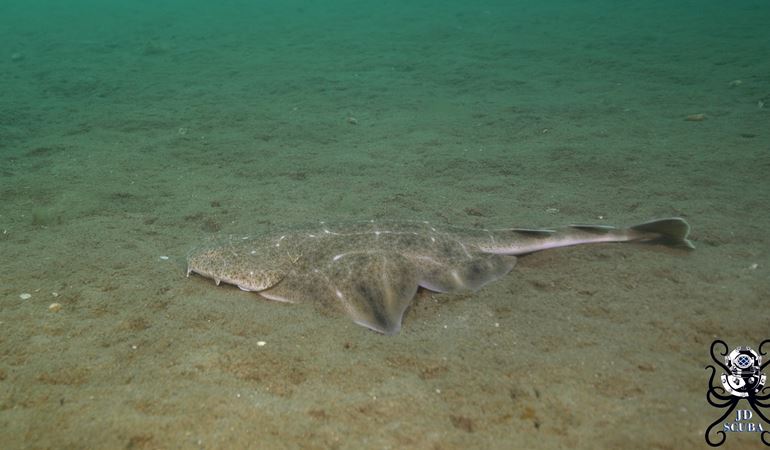 For the first time ever, scientists have recorded footage of a juvenile Angelshark (Squatina squatina) in the UK. Filmed in North Cardigan Bay off the Welsh coast, the unique underwater footage provides encouraging evidence that Angelsharks are using Welsh waters to give birth. Watch the video of the Angel shark.

Photographer and marine biologist, Jake Davies, Angel Shark Project: Wales Coordinator said: “I’ve always kept an eye out for Angelsharks during dives, having worked to better understand the species for the last four years. I couldn’t believe it when I saw the Angelshark, and what was really exciting was that it was a juvenile, just 30cm in length – providing further evidence that the species is giving birth in this area.

“It was incredible to watch and film it swimming, burying into the sand and then using its camouflage to ambush prey. This footage is far beyond what we thought would be possible to capture in Wales.”

The Angelshark is listed as Critically Endangered on the IUCN Red List of Threatened species following a decline in their range over the last 50 years. Angel Shark Project: Wales (ASP:W) is a collaborative project led by Natural Resources Wales (NRW) and ZSL (Zoological Society of London). The project works with local communities and fishers to gather Angelshark records, alongside carrying out research to better understand the ecology of the species in Wales. ASP:W is currently funded by On the EDGE Conservation and Welsh Government.

Joanna Barker, Senior Project Manager at ZSL and Co-Founder of the Angel Shark Project, said: “This footage supports our hypothesis that Angelsharks give birth in waters around Wales. The size (30cm) and white markings on the dorsal fin edges show the Angelshark was born this year, confirming we have an active breeding population in Wales.

“This new footage is extremely useful to inform our conservation efforts for this species, especially as Wales hosts one of the last Angelshark populations in the northern most part of their range.”

Angelsharks are protected in Wales, through inclusion on both the ‘Wildlife and Countryside Act’ and ‘Environment (Wales) Act’, and it is an offence to target or disturb this species. Last year the Wales Angelshark Action Plan was launched by ASP:W, setting out priority actions to safeguard this species in Wales.

Ben Wray, Marine Ecologist and Project Manager at NRW added: “Little is known about the status, ecology or location of important habitats for Angelsharks in Wales. Only 4% of Angelshark records gathered by ASP:W to date are of juveniles, so this footage is extremely important. It builds our understanding of Angelshark ecology, including that they use both sand and mixed habitats and that the juveniles prey on gobies. We will use this evidence to help plan future research and discover more about this rare species in Wales”

If you have a Angelshark record or have accidentally encountered this species whilst fishing, please report it to www.angelsharkproject.com/map and follow the best practice guidance.